This was the first outfit I planned in my head. By sheer willpower, I held off until the middle of the week until I wore it. It was the only outfit that seemed “right” and I had a lot of things going on this day and thought it would be the most appropriate of the week. 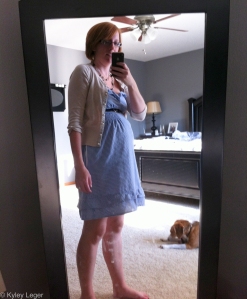 It’s pretty much what I envisioned it would be. The skinny belt worked well even though the dress scrunches under the bust. It’s a spaghetti strap dress and the bust piece ties in the back so it does have some form to it. The form looks a lot better when I’m pregnant compared to not, but I did wear this for Maximus’ first birthday party.

So far I like the season of pregnancy and weather, but I’m really nervous about finding cold weather clothes that I can wear. What are your favorite cold weather maternity wears?

Happiness. 🚴🏼‍♀️❤️
These neighborhood boys are thick as thieves.
Things Hudson Climbs, a thriller series. #18monthsold
Tonight’s sunset is the perfect backdrop for grant writing! Today had a few hurdles as my stress levels got higher, Hudson’s neediness also rose, and my patience grew thinner. • It turned into a night where I counted the minutes until baby bedtime {and then he cried for too long} because it feels like I have a million things to get done. • This sunset is a reminder to find my balance between hustle and rest. I know evenings are for family and it’s not helpful to be anxious for what comes after bedtime. Tomorrow is a new day for all of us and I’m going into it with a clearer mindset and positive attitude. 🧡
Something we’ve gained in 2020...together is a natural state. 🧡Power washed all the garage things. If you’ve done it, you know what our front yard looked like. 😆 🧡Flip flop skating to squeegee the floor. Like wearing ice skates & pushing something that requires core work and balance. #workout 🧡Chronicles of Narnia continues. Monday was a great day!
When you get out of the house for the first time in 2 1/2 months but forget what it’s like to be around people. Close your eyes and pretend they aren’t there. 🤣 #mamasboy💙 #separationanxiety