Six months is a lot of fun at our house. Quinten is very interactive with us and himself. He loves making noises, sometimes mad and sometimes happy. He can easily be entertained by his hands, feet, blankets, and anything else he can get into his mouth. He is very active and moves from the start to end of his time awake. I don’t remember it being any different with Maximus at this age. There is so much to look at and try to get to!

We’re introducing solids this month. So far Quinten has enjoyed everything we’ve given him. He’s eating carrots, avocados, and bananas. He’s doing really well at chewing and can eat a lot. We’re giving him really soft foods and haven’t given him any puree foods. I’m not surprised that he enjoys eating, even if he’s sitting in his chair yawning. He’s also increased his bottles during the day. He takes a couple of 9 ounce bottles during the day.

He’s rolling all over the place and we can expect to find him in some random corner of the room. He’s trying to get to furniture to chew on them, he’s running into coffee tables, and he’s trying to get to his toys. Like I said, it’s a lot of fun at our house right now!

He’s almost sitting up unassisted! He eventually topples over but doesn’t seem to care at all. As much fun as he has rolling all over, he’s getting restless because he has so many new things to try. It’s a constant battle between finding the right position. Bouncer / jumper so he can jump, floor so he can roll, sitting up so he can play with ALL THE TOYS, and standing up on your lap so he can be a show off (or chew on your face).

This past weekend he started getting up on all fours with his belly off the ground! This is such a strange thing to see your baby do. Rolling is exciting to see, but you usually have a lot of pre-work before the baby can get all the way over, so it doesn’t feel sudden. This feels so sudden. Butt in the air is one thing and it’s cute, but then all of a sudden both arms went up and he was looking around from higher ground. Either he’s really good or he’s been practicing in his crib. He didn’t look like a new fawn testing out the limbs, he was just UP. 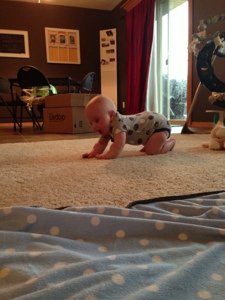 THEN, Sunday night he decided he wasn’t tired at 9 pm. I put him on the floor and he immediately went up on all fours. I was laying down next to him and he looked over at me and laughed. I kid you not, he laughed and started ROCKING FORWARD AND BACKWARD. Obviously, I grounded him for the rest of his first year. No joke. He did it so many times that I got a video of it. And he did it again in the morning. I’ll be surprised if he isn’t crawling by month seven. (Insert sad mommy face mixed with happy smiles.) For what it’s worth, I blame the dog. I think Quinten wants to chase after him so he can snuggle him (or chew on his face). His fat little hands open and close in a weird baby-petting-the-dog kind of way. Wrigley doesn’t seem to mind, but he’ll learn quickly that the smiles he gets are the ones he gives right before he chews on your face. Baby dude has no poker face. 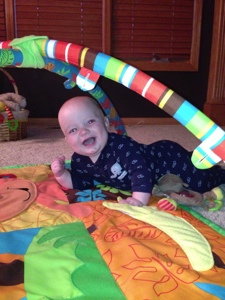 He has the most smilies I’ve ever seen. He wakes up slowly in the morning and talks to himself and chews on his fingers while he lies on his tummy. When he hears someone come into the room he pops up so quickly that he sometimes falls over. Then he immediately smiles and laughs. It’s the best greeting! I remember Maximus being incredibly smiley and chatty for 30 minutes when he would wake up. Quinten wouldn’t be content to hang out that long so I’m sure that will also mean that as a toddler his nap time will end soon after he wakes up. Unlike Maximus who likes to slowly wake up and hang out by himself for a while. 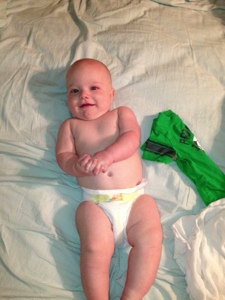 His six month check was normal. He didn’t like the shots but was happy when he got to take a nap.

I can hardly remember the itty, bitty baby that we brought home from the hospital. It seems that both of my boys have grown up so much in the past six months. Life is very much on fast forward, but we’re enjoying as much as we can in between the teething and whining. Before we know it they’ll be chasing each other around the house!