Having a second baby is a lot like riding a bike for us. Feed the baby, change the baby’s diaper, swaddle the baby, and wait to start the cycle all over again. That’s about the only thing that is the same. Quinten has made his differences known since day one.

He came out with a beautiful latch and knew how to eat. Some could say that’s just as much my experience as it is his ability to do it. Either way, HUGE STRESS RELIEF on day one. On the second day Bryan said, “this is so much easier than with Maximus. It’s not stressful at all!” It’s been such a peaceful experience, with both of us falling right into step.

Quinten doesn’t cry. Before you hate me, he does squeak and on a few occasions has cried. I won’t complain about a baby who doesn’t really cry and I’ll duck before people start throwing things at me. He eats every 2, sometimes 3, hours. I have wondered if he’s really hungry since our only indication is him getting agitated. If he was a hungry crier, it’d be pretty obvious. Maybe I’m keeping him too happy! 😉

Being a rockstar at eating, he’s gained weight. Maximus was always in the lower percentage. Based on my quick search, Quinten is in the 75-90%! You guys, that makes my mama heart explode. I love his chunky cheeks, the wrist creases that are starting to form, and I especially love his FAT legs. I have to move fat folds to bathe him or change his diaper. It’s the best! At 5 weeks, he appears to weigh a tad under 12 pounds. At 8 weeks, Maximus was a tad under 11 pounds. Point, Quinten.

His neck strength has been great since the first few weeks. Again, not something we experienced before. It can get annoying sometimes because he doesn’t sit still when you’re holding him upright. And since he’s still itty, bitty it’s kind of scary! Usually this is an indication that he wants some space and he’ll happily hang out on the floor.

The biggest difference between the two is sleeping habits. At six weeks, Maximus moved to his crib. Come Saturday, I will not be moving Quinten. If I did, that would mean I’d walk to the front of the house four times during the night. I’d rather stumble to the foot of my bed to get him out of the pack ‘n play. It’s rough, but as his weight shows, little dude wants to eat. Who am I to deprive him of that luxury? {A few more weeks and then we’re going to figure something out!} We realized the first few days at home that Quinten didn’t like the blanket swaddle. Maximus rocked the swaddle until sometime between 5-6 months. It’s my comfort. I thought it made my babies sleep. Quinten is in a swaddle me sack, but he can’t be bothered to have his arms swaddled in. So, we adapt as we can. 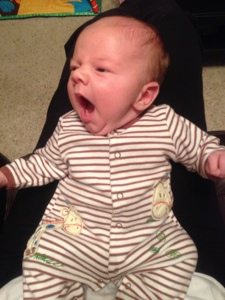 Maximus DID NOT like tummy time. Quinten loves it a little too much. Sometimes he moves his head around, but most of the time he falls asleep. FOR HOURS. I’m fairly confident that the reason he’s not sleeping at night is because he’s just not as comfortable. {Like I said, a few more weeks until I feel confident that he *might* be able to sleep on his tummy at night.}

Quinten is his own little person and I’m excited to see how he grows into this personality. In the meantime, we’re adjusting our baby style to reflect him.