I woke up at 4:40 am with a pretty strong contraction. I’d been having strong ones at night the previous week, but nothing had woke me up. I didn’t think much of it and tried to go back to sleep. A little while later I had another equally strong one so I rolled over to look at the clock and saw that it had been 15 minutes. Also not all that unusual but I was surprised that they had both been strong. I tried sleeping again and had another one 15 minutes later. By this one I had to focus through it and woke Bryan up with my breathing. At 5:25 I got up and took a shower. Bryan made me leave the door open in case I needed him. I really enjoyed that hot shower as I imagined it would be my last relaxing one for a long time. {I remember being afraid of the water after I had Maximus. I didn’t want it touching my incision.} Close to 6 am Bryan called my mom and asked her to come over. He’d showered and we’d both finished packing our bags. I was able to stand up during all my contractions but I did have to stop until they passed. A little before 7 am Bryan called First Nurse to let them know we were going to come in. At this point I was sitting on the couch eating a donut and drinking water. My contractions had gotten closer together but I was also experiencing a little bit of inconsistency. I should note that i I never wrote any times down. I just looked at the time and tried to remember when the last one had happened. I suppose there’s a little room for error in that method! 🙂 They had not gotten any easier, but I was a little leery about the timing. Being the second time around, I knew the pain I felt was the beginning of a quick labor with Maximus. There were only 5 hours between those sharp pains and my first born.

We arrived at the hospital around 8 am. As we walked in I anxiously said, “I hope I’m not that woman who shows up and she’s not really in labor.” The contractions had continued on our drive but I felt oddly calm. Maybe it was because I’d done this before. But it made me doubt that it was actually happening. We were taken to a tiny observation room and I was hooked up to a heart monitor and a contraction monitor. I sat in there for over an hour before the doctor came in. I had experienced a few really STRONG contractions and was extremely uncomfortable. But, again they weren’t getting any closer. The nurse came in a few times and commented that it was unusual for me to have such strong ones and then have ones that I barely felt. Finally, the Doctor came in to talk to me. He’d just watched the monitors at the nursing station and saw that I’d had a very strong contraction. It was the one that made me wiggle and start to panic in my head. I needed a plan. I needed to prepare myself if I was going to actually DO THIS. It was the same doctor who delivered Maximus and that was very reassuring to Bryan and I. He walked in and greeted us as if it hadn’t been 2 1/2 years since we’d last met. He checked me {and it was JUST as uncomfortable as I remember!} and determined that I was 4 cm and 100% effaced. Everything appeared to be good. He told me I was in active labor and then told me what I’d been dreading. “This isn’t a VBAC hospital. We can let you labor longer or I can find the anesthesiologist and book the OR.” I expected this response because it was a Saturday morning, but I tried anyway because they didn’t seem busy. I asked if there was any chance I could do a VBAC and he repeated again that the hospital policy said no. I agreed to a c-section and requested that we do it as soon as possible because there was no point in suffering through the pain if I was going to have a c-section anyway.

At 10:15 am the Doctor came back into my room and said that the hospital had declined my request for a VBAC. He explained the procedure as well as the preparations the nurses would do. I signed the consent form and they started hooking me up to an IV, putting in a cathedar, and putting bracelets on me. Soon, the anesthesiologist came in and explained what he’d be doing. Until this point, my contractions had stopped. I think it was at least 40 minutes that I’d gone without them. I was also sitting up cross-legged on the bed and I’m not sure if that had anything to do with it. When the anesthesiologist came in I was laying back in the bed again and had the hardest time listening to him because I was having contractions again. And they were STRONG. I remember thinking Get on with it buddy, I can’t hold eye contact with you much longer!

Around 11 am my nurse asked me if I was able to walk back to the OR. It wasn’t on my list of things I wanted to do, but I said yes. I awkwardly walked with her holding on to one arm, Bryan holding the other, and the nurse pushing my IV cart. Awkwardly doesn’t fully describe it because I had a cathedar that made me not want to move and I had at least one contraction while we were walking back there. Bryan waited in the hall while the anesthesiologist started my spinal. This was one of my fear points. It turned out to not be as bad as I expected. The initial numbing agent did hurt, like he told me. After that I couldn’t feel it. My body felt cold, like he told me, and they had me lay down. They tilted the table to the left and then with my feet above my head. As nurses prepped me and the room, the Doctor came back in. I was checked to see if I could feel a cold alcohol swab, then the table was adjusted some more so the medicine would travel a little higher on my body. I was given an oxygen mask and Bryan came in the room.

I didn’t feel anything that they were doing. In the reflection of the lights, I could see the Doctor and the nurse assisting him but I didn’t look long enough to see if I could tell what they were doing. Bryan did a good job of talking to me in the beginning to turn my focus from what they were doing. At the time I remember being kind of groggy but coherent. I didn’t have much desire to talk, but I knew everything that was going on. If you know Bryan, you won’t be surprised to hear that he started geeking out with the anesthesiologist about equipment. Then he realized that I wouldn’t care about that so he started talking about random things again. I had three small panic attacks throughout the whole process. They were mental panic attacks probably brought on by feeling claustrophobic. I had on a huge oxygen mask, a hair net, and my glasses. My panic attack morphed itself into my eye itching. Like crazy! Bryan had to take my glasses off and was softly trying to itch my eye. I finally told him to literally jab my eye.

After what felt like an eternity, the anesthesiologist stood up and looked over the curtain. He poked his head into my line of sight and told me they were almost to the baby. A few minutes later, at 11:20 am, we heard someone say, “I see boy parts.” {Later Bryan commented that no one knew if we knew what we were having. During the spinal, one of the nurses asked if we knew and what we already had.} Seconds later, a nurse brought our little boy around the curtain so we could see him. We never got to see the gooey Maximus. She handed him to the pediatrician and they got his stats while a nurse asked us if he had a name. Quinten Marcus. The pediatrician came around the curtain and told us, “He’s perfect. 7 pounds, 4 ounces and 20″ long.” They took him to the nursery while the Doctor finished with me. This was by far the longest portion of the surgery. Soon we heard the nurses counting. It took me a couple of series to realize they were counting tools and instruments. It took me even longer to realize that he couldn’t close me up until they were done counting. This was by far the oddest part of the whole thing and I know at least one of those panic attacks was during this period. I just wanted it to be DONE. Finally, he told me he was going to close me up.

I was in the recovery room with my nurse. Bryan had gotten his bracelet as soon as Quinten was born so he’d gone to see him. The difference this time around was the he was told he could go back and forth between the recovery room and nursery as often as he wanted. Bryan came back to see me and showed me pictures of our little guy. 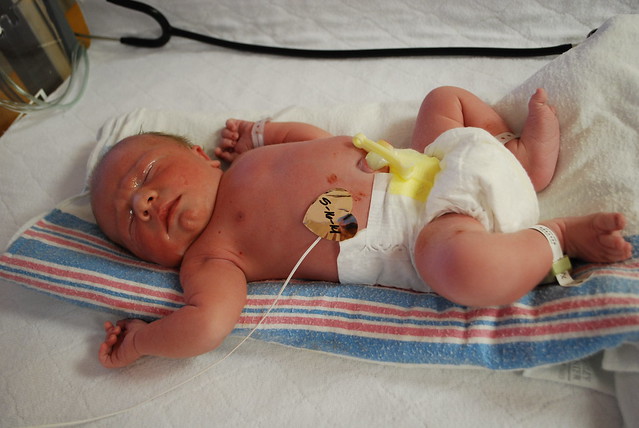 The nurse got on the phone and asked a lactation consultant to bring Baby Leger to recovery for skin-to-skin. And that phone call is the reason I go to that hospital. I hadn’t asked for anything or even asked to see him. With my previous recovery I hadn’t been able to see Maximus until I was in my room. I assumed this recovery was the same. A very nice nurse {who I think we talked to later but I’m not sure because she was in scrubs the first time} uncovered Quinten and put him on my chest. When my hour was almost up I started feeling nauseous. I asked the nurse to pick him up and then told Bryan I was going to get sick. Little did I know that was the first of many times I’d be sick that day. The rest of the day is a blur to me. After I got sick, they transferred me to my bed and wheeled me to my room. The same nurse brought Quinten back to my room and tried to get him to latch. The first few times we tried I had to have someone hold him because my arms still felt weak. That evening he latched for the first time and we’ve been going strong since. I continued throwing up until 10 pm that night. Unfortunately they couldn’t find an anti-nauseous medication that would work for me. They even tried a motion sickness patch. I wasn’t able to keep my eyes open because it made me dizzy. I wasn’t able to sit up because it made me dizzy. That makes for an interesting experience to try and throw up after just having stomach surgery. Not pleasant doesn’t exactly describe it. 🙂 When Maximus came to visit I was only able to open my eyes a few times and had to fight back throwing up until he left the room. I didn’t want to scare him any more than he probably already was, but he didn’t seem to notice too much. 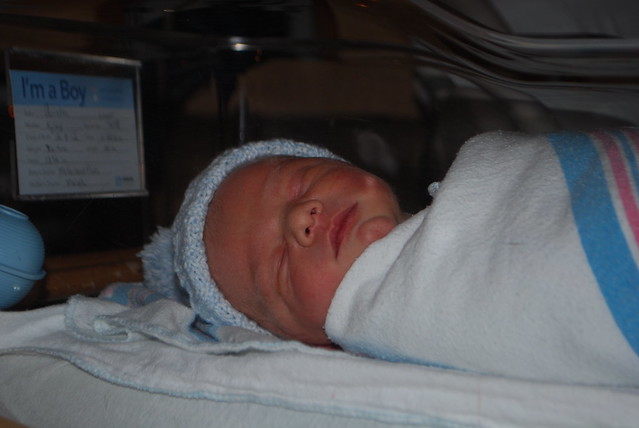 We’re two weeks out and all doing well. My recovery has gone great. Quinten has a good schedule and doesn’t need much other than feeding and burping. Maximus has adjusted ok. Our first week was full of a lot of whining and crying. Our second week was much better and we got back into a routine.