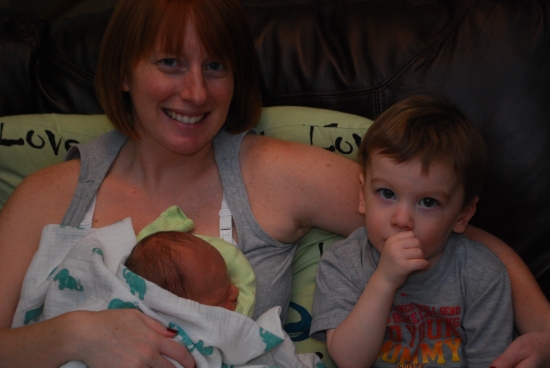 If you’ve been around for a while you know that Maximus is a thumb sucker. He has been since he was a baby. I had zero intention of giving him a pacifier. I don’t judge others for using them, I just wasn’t going to use them. I convinced myself that there was no place in our house for them. To be perfectly honest, I’m not sure if I decided I didn’t like them or I feared them. With Maximus I was very concerned about nipple confusion. I didn’t give him a bottle until he was about ten weeks {and he hated it} and then we didn’t do it often {sorry to my provider who had to teach him how to take a bottle!}. I had read plenty of books that said he wouldn’t be confused and was old enough. My philosophy was to stick a boob in his mouth if he was acting a certain way. It was what my maternity leave was for so it didn’t bother me. Maybe I could have contained him with a pacifier. I don’t know. It’s water under the bridge at this point.

Enter second child with a mission statement to set himself a part from his brother. Dude came out eating. He spent little time sleeping, but was easy to take care of. Then all of a sudden he wasn’t. He went through a series of nights where he was cluster feeding from 8-midnight. Then he wasn’t and he was fussy. All of a sudden I knew what the witching hour was. {Please don’t throw things at me! Maximus just likes to sleep.} I was not a fan of this new thing. By 8 pm I was Exhausted. Remember I was still getting up every two hours at night. On good days I was getting an hour nap in the afternoon, but was in need of another come 9 pm. I imagine Quinten’s witching hour is much like any other baby – Must.Stand.Up. DO NOT SIT DOWN, MOMMY! Rocking and swaying and bopping back and forth. Trying to find a rhythm to get that baby to sleep. Eventually he’d fall asleep. That’s the thing about witching hours, they always end. But they are back the next day.

It took a good friend to say, “have you thought about giving him a pacifier?” Well, no. In the midst of my exhaustion-swaying, I never had. I had been watching him get mad that he wasn’t coordinated enough to suck on his hands at will. So, I thought about it for two nights before I told Bryan I was going to buy some. I couldn’t do the standing up thing anymore. I needed to sit on the couch and rock him. I spent a ridiculous amount of time in front of the pacifiers at the store trying to decide what was the least competitive with breastfeeding. Or, did I want one that was exactly the same? I HAD NO IDEA! I was in a completely new world. {Need a chuckle? I had recently sold BRAND NEW pacifiers at a summer garage sale. Baby shower items from Maximus. I’m about to have a new baby, no he won’t need a pacifier either. They’ve been in this house for two years, throw them out! Those were the brand I would have picked if I had access to the right store. Whatevs.}

Then I had to teach him how to use one. Ugh. Crap! That baby can’t keep a pacifier in his mouth. We had a rule, it wasn’t to be in his mouth all day. It was only needed if the normal tricks didn’t work {stand up and sway} and never to be given around eating times. It worked! We had to work to make it work, but it worked! It saved me from the witching hour! He only went to bed with it in his mouth twice. It always fell out before then and he was fine. 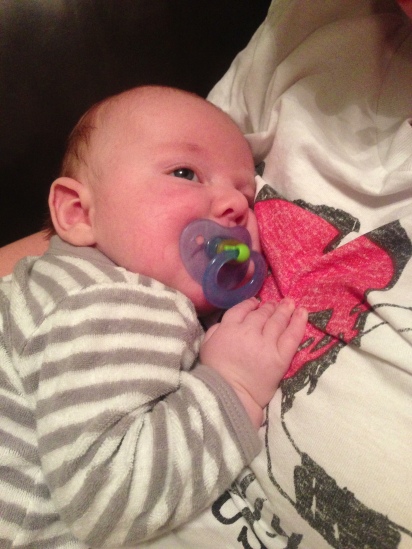 We sent him to daycare last week and didn’t send a pacifier. I had only used it a few times to calm him down for naps during the day so I didn’t see the need to turn him into a pacifier baby. Around this time he was getting more consistent about sucking on his hands when he was held. {Loud, sucking sounds are hilarious when they can be heard across the room and the source is a baby!} I can’t remember how or when, but around this same time we gradually stopped using the pacifier at night. Maybe I had more energy because he was starting to sleep longer stretches at night. Or, maybe it was easier because he was going to bed sooner. Whatever it was, the picture above ended up being the last time we used the pacifier. They are tucked away in a dresser now. I’ve been doing this parenting thing long enough to know not to throw them out {again} until we’re past the oral fixation stage. Whenever that is.

You know where this is going, right? After a week of practicing during the day, Quinten is a successful thumb sucker! It doesn’t matter if he’s laying down or snuggling, he can put his thumb in his mouth. He can be quite noisy. I forgot how adorable it is to see and hear a little baby sucking his thumb! I can hear him sucking his thumb during the night and in the morning and I know that thumb is helping us both sleep through the night. 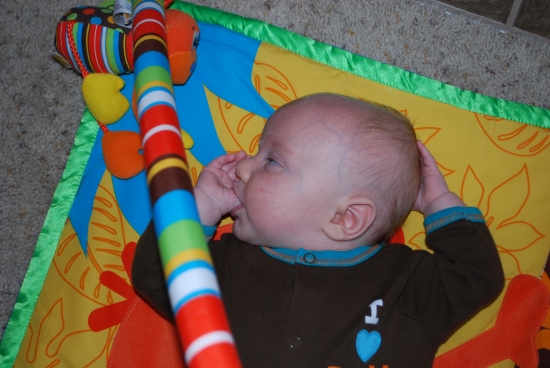 All signs point to another avid thumb sucker! Maximus thinks it’s pretty funny and likes to point it out. Hello, kettle?

Any chance we’ll be able to convince Maximus to stop sucking his thumb and say it’s only something babies do? Yah, I didn’t think so either! 🙂 It’s a tradeoff. I got to sleep instead of tending to him in the middle of the night. But, I won’t be able to convince him to throw a pacifier away or be there in the middle of the night to tell him to stop sucking on his thumb. I guess we should start saving for braces now. For two.

It may sound like a lot of rambling about pacifiers and thumb sucking. Really, it’s just another example of how children make you flex and grow every day. No preconceived notions can withstand the powers of a baby!