I’m doing well in most aspects. I’m wearing down earlier each day and I’m spending more time on the couch trying to rest. It doesn’t do much for getting things done, keeping the house picked up, or preparing supper. {See also: uh, not helping very well with the toddler.} I keep trying to remind myself that it’s ok to skip those things every once in a while. After all, I’m weeks away from having another baby. This body has spent the past 9 months doing A LOT of work to make that happen. I suppose I should give it a break.

I had my last two week appointment today. They are every week from here on out. Today was as unproductive as most other appointments. Heart beat sounded good in the 140s. I gained another couple pounds from two weeks ago. After seeing the number, I made Bryan get on the scale too. He weighs what I weighed at my last visit. 🙂 Oh well, it happened last time too. Dang skinny boy! 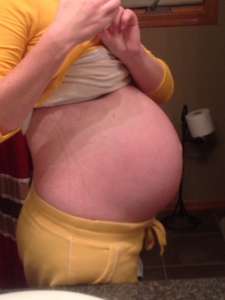 I have complaints, but nothing unusual for the end of pregnancy. My legs have swollen a little, my previously broken foot is bothering me consistently, and I’m starting to get pretty uncomfortable. But, Maximus has a nice seat to rest on when I’m holding him!