Recently, Maximus has been experimenting with calling us mom and dad. I’m not really sure how Bryan responds, I haven’t paid attention. When he tries to call me mom, I give him a raised eyebrow and say, “it’s mommy.” Sometimes he laughs at me and continues to call me mom. Most of the time correcting him “fixes” the “problem.”

As most little kids do, Maximus loves playing with phones. Toy phones, real phones, remotes used as phones, or even a calculator held up to his ear. When he first started playing with them, he couldn’t talk. He’d hold it up to his ear and babble. As he got older, he wanted to see what we did so he’d always want us to hold it up to our ear. We usually called daddy or a grandparent.

The past few weeks he’s been grabbing my phone and putting it up to his ear to have a conversation.

Then he always turns to me and says, “that was mom.”

At first I thought we were having the name “problem” again. After about the 10th time that he’d done the exact same thing, I decided that he’s not talking to me. He’s repeating a conversation. Or mom is the name he’s picked and he’s mimicking how people talk on the phone. The really funny thing is that Bryan and I are NEVER on the phone. My preferred method of communication is either social media or text messages. I might have one phone call a week on my cell phone. Bryan is probably about the same.

I love that he’s consistently having this “conversation.” It sticks out in our heads as one of the funny toddler moments in our life right now. And, it’s a nice change when he’s been grumpy or whining. A funny, silly toddler can erase the tantrum memories very quickly! Now I need to try and catch it on video! 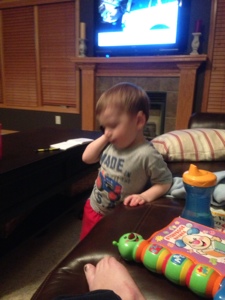