We’re getting ready for a work trip. A seven-day long work trip. I’m thankful that Bryan is coming along with, but we’re going to miss Maximus a lot. This weekend we tried to cram a lot of family fun into the short time. Then life got in the way. My neighbor had a garage sale and we decided to take our piles over. Five hours of standing and re-arranging is a lot for me at this point. I was fine during, but as soon as I sat down for lunch I realized that I was beat. I could barely keep my eyes open. {More so from Maximus waking up at 6:30 I’m sure.} My feet were sore, even though I had tennis shoes on. By the time we got done with lunch, Maximus and I were looking at a 30-minute nap before we needed to be at a birthday party.

A 30-minute nap is never adequate for a toddler, especially when he didn’t get enough sleep the previous night. In predictable toddler fashion, he played in his bed very loudly during the 30-minutes. I peaked in on him and he had a bunch of golf clubs and egg shakers in his bed and he was sitting up. He was very quiet about pulling all the items into his bed, but was not quiet about playing with them. Eventually he was singing at the top of his lungs and shaking the eggs as hard as he could. I put my feet up and listened to the endless noise while Bryan got ready. It was enough of a rest to realize that I was exhausted and had no energy to get up. I did anyway and then prayed that Maximus wouldn’t fall asleep 5 minutes before we needed to get him up. Feeling so exhausted made me a little nervous about my trip. It’s a physical event, lots of walking, standing, and not much down time. It’s basically go-go-go for seven days. I wasn’t worried about it until this weekend when I realized I need to rest a little bit. Here’s to hoping that I’ll be able to rest a little and wake up each day feeling refreshed.

It won’t surprise anyone that after a three-hour party, Maximus crashed as soon as we got in the car. Before we got off their street, I turned around to see eye lids falling and drool coming out of his mouth. He wanted nothing to do with me trying to keep him awake and basically opened his eyes to glare at me. Watch out son, mama’s only going to get more annoying! 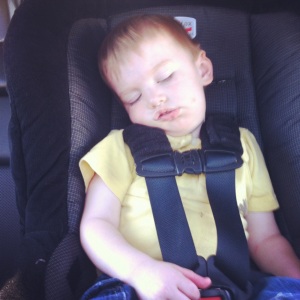 Falling asleep at 5:30 is by no means ideal for a toddler who would probably wake up at 4:30 the next morning, so Bryan tried putting him in the living room. Thankfully, he was sitting up on the floor when I came in the house. The next two hours were less than perfect. He was crabby and not a very good listener. We made it through and he went to bed at 7:45. Only to wake up at 6:30 again on Sunday. What I wouldn’t give for a weekend of sleeping in until 8. His new wake-up time snuck up on us. I can’t pinpoint when he stopped getting up at 8, but I sure do miss it!

On Sunday, we both got in a nap. Maximus held out a little longer than I did, but we both looked refreshed afterwards. Now, if only it was acceptable for me to go to bed at 8 too. Anyone else read bedtime stories through yawns as the toddler asks for more books?

1 thought on “Maternity Monday: This body isn’t holding up like it used to”