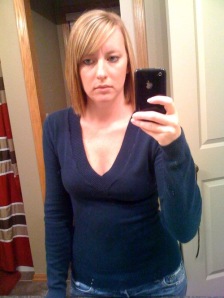 Not the most flattering picture, but this is the best I’m willing to share in terms of the “before” I look different.

Ten weeks sounds like a big number. It’s most of a summer vacation from school. It’s the longest part of the winter (usually / hopefully). It’s almost a full softball season. Ten weeks can sound like a lot, until you look at how many weeks you have left. Now, ten weeks isn’t a lot. Ten weeks only gets me 1/4 of the way to my goal. It’s 25% of the end result. It gets me one finger and one toe and maybe a little more. Ten weeks doesn’t get me very far when I’m looking at another 30 weeks. Ten weeks gets me a tiny baby who is the size of a blueberry. Ten weeks gets me nauseous and hungry at the same time. Ten weeks sends me to the couch for a nap over my lunch hour and as soon as I walk in the door at night. Ten weeks gets me to a point of hungry I’ve never experienced before. But, ten weeks also gets me farther than any week has gotten me before. Ten weeks gets me closer to being a mother than I was twelve weeks ago. It is 30 weeks closer to a family of three instead of two. It turns out, ten weeks is just perfect no matter which direction you come from!