We do a lot of family activities outside the home in the summer, so I thought I’d start a post of our favorite monthly family activities. Our favorite family activity for May was a special viewing of Big Hero 6. We don’t see a lot of movies, so we rented it the weekend before. The boys were mostly into it so it was a bit of a gamble for the actual event. 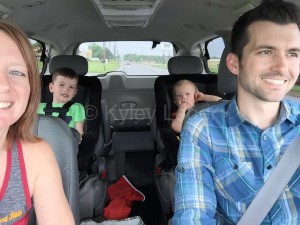 Getting out of town!

We went out for a family dinner and Maximus fell asleep 20 minutes before we got there. Bryan and I kept telling Quinten to talk quiet because Maximus was asleep.

A child falling asleep in the car is kind of like throwing knifes in the dark. You never know what you’ll see when the lights come on. Other than carrying a 4-year-old for a block, he wasn’t a mess. As parents, we felt like we got lucky! It could have been an awful wakeup and transition. We ate at a new location of the place that was our go-to date night spot in college. It used to be a cozy sports bar and now it’s a classy sports bar with partitioned dining areas. WE WENT IN THE CHILDREN SECTION! How smart! There were three other babies in there and our kids weren’t the loud ones! That’s how family date nights should always go.

The movie viewing was supposed to be at the Iowa State University football stadium, but we had rain that day so they moved it to the basketball arena. We were all surprised to see our favorite mascot, Cy, standing outside the doors to the arena. We jumped in line while Maximus tried to wave at Cy. As the line started moving, he got a little concerned about what we were actually doing. 🙂 At this point, Quinten was buried in Bryan’s shoulder. I convinced Maximus that he and I could both take a picture with him.

I love that Maximus is holding up his finger. I didn’t know he was doing it until I looked at the very windblown pictures. The boys haven’t been to a basketball game yet, so they were pretty excited and Maximus kept saying we were going to watch a basketball game. 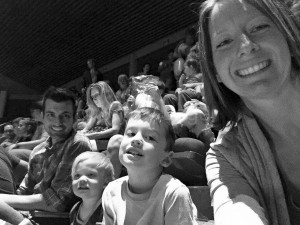 We got front row seats in the upper deck and didn’t have to worry about the boys kicking people in front of us. Another win in the family outing! Kids and seats don’t work when other people are in them. Especially when they constantly put their feet up and trade seats.

The family next to Bryan offered us some popcorn from the giant garbage bag. There’s one thing Leger Boys like and it’s popcorn. I got a couple of pieces from little hands, but wasn’t ever close enough to the container to grab much. I wasn’t sure if it was bought or handed out {they were handing it out when we left the building}, but Maximus walked right past Bryan and asked the guy for seconds. Kids. Maximus says that Quinten and I ate the second tub, but that’s only because we ate the last of it. Those two definitely ate a lot of popcorn that night! And I thought I’d have water to drink from, but after their first drink I wasn’t putting my mouth back on that backwash infected bottle. Kids can be so gross sometimes.

We made it through the whole movie, no one got scared, they played musical chairs, and we didn’t regret the family movie night. My kids can add a lot of excitement to public outings. Every successful outing helps us forget about one bad outing. {But every bad one makes us stay home twice as long before we venture out again.} It doesn’t hurt that at the end of the night they can sleep the entire way home. And, not throw fits when we change them into pajamas and put them to bed.

We’ll definitely do another movie night in Ames!