Yes, he does! If you know him, it’s pretty obvious that he loves to eat. He’s been taking 8-9 ounce bottles for a while now. If you try to give him less, he will scream until he gets more. Dude knows what he wants and it’s milk. Or food. Really, just anything will work. We’re on our second week of baby led weaning. I’m no expert, I haven’t read any books, and it didn’t really work with Maximus. But, I decided to give it another shot. I wasn’t exactly sure when I was going to feed Quinten. We tried some bananas with Maximus around 6-7 months and he didn’t like to eat. I didn’t force the issue because I wasn’t concerned about his growth and he was sleeping. Milk was enough for him. Quinten is not the same as his brother. Although he has been sleeping for the past seven weeks, he clearly needs more milk than Maximus ever did in a day.

I did a little online research to refresh my brain and cracked open a banana. Maximus took over the banana and gave me a little chunk for Quinten. I cut it into quarters and put a little piece in his mouth. And this is where he blew my mind. He chewed it! He didn’t make a face and he didn’t choke. He gummed it and swallowed. Maximus proclaimed, “HE DID IT!”  and I shared a puzzled look with Bryan. He ate a couple of slices and then I tried to clean him up while he tried to eat the paper towel. Things I could have changed: I could have remembered that babies wear bibs. Heh. I also could have nursed him after instead of before. Because I was just going to see how it went, I wasn’t worried about him being hungry when I fed him food.

The next night we gave him cooked carrots. He ate those, too. We marveled at him sitting next to us at the table, chewing his food. Maximus was again his cheerleader, and I remembered Quinten’s bib. Things I could have changed: letting him try to play with his food and start to pick it up.

The next day we tried avocado. I put a dollop on Maximus’ tray so he could eat his quesadilla with it. (He didn’t touch it.) Quinten got a couple of big spoonfuls in a bowl, which he devoured. I had fun using a spoon and was soon reminded that babies like to clamp down and not give the spoon back. He also tried to fight me for the spoon a few times. 🙂 I remembered a bib this time too, thankfully! Things I could have changed: I didn’t need to mash it up. This would have been the perfect food to cut into large chunks and let him get it into his own mouth. 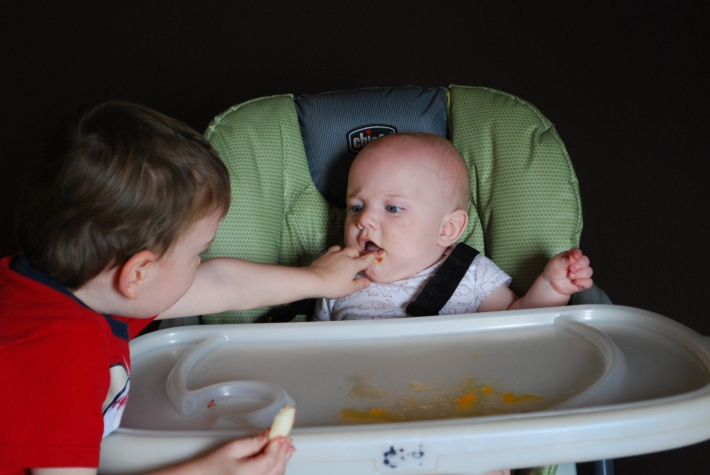 The next day we were running low on food so I fed him oatmeal. This day we were busy with supper and I was starving so I decided to feed him before I nursed him. He screamed at me. Because.I.wasn’t.feeding.him.fast.enough. Yah. With oatmeal in his mouth, he yelled for more. He ate two and a half bowls of it! And then looked like he was going to pass out in his high chair. 🙂 Things I learned: he’s a bear when he’s hungry! 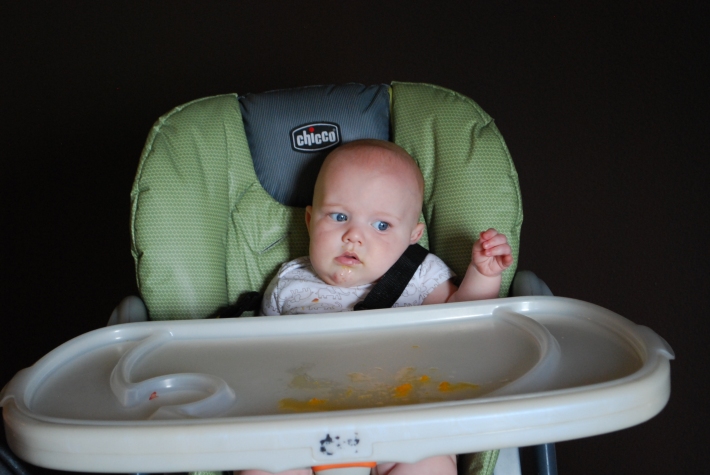 The next day he had food for lunch and dinner. We found out he loves peas as much as Maximus. Granted, Maximus can really shovel them in and Quinten can only eat as fast as we put them in. He also ate a little stuffing and some mandarin oranges. The oranges were the first time we got to see him make a face. It was awesome! He kept eating them, but he was shuddering as he was chewing.

He tried picking up the peas but he was smashing them against his tray instead. No pincher reflexes yet. This day Maximus decided to share his apple so I gave Quinten a slice and he gnawed on it and got a chunk off. Maximus cheered excitedly, “GOOD JOB QUINTEN! GOOD JOB EATING LIKE A BIG BOY!” Quinten loved the attention and grinned back at Maximus while apple fell out of his mouth.

Quinten seems to be enjoying his new big kid status. And we love that he’s willing to try anything, but neither of us was ready to get back into big kid diapers. Blah! 😦 Now, if I’d just remember that after eating food, his natural instinct is usually going to be to bite...