The baby could have cared less about Santa. He didn’t even wake up during the visit. At two weeks old he wasn’t even the youngest Santa visitor this year. {The youngest was only four days old.}

The toddler was super excited to see Santa and didn’t want to wait our turn. {A whole five minutes.} Once we walked inside those ropes, his story changed a little. He didn’t want to make eye contact with Santa and he definitely did not want to sit on that man’s lap! I tried to carry him over but he was moving around like only toddler’s can do. I finally had to put him down so he didn’t hurt me. I put him on the step in front of Santa and thought he could at least look in the general direction of the camera and we’d have a crying toddler Santa picture. That didn’t happen so we all sat down with Santa. {This whole time Santa was holding my newborn and swaying back and forth with him.} 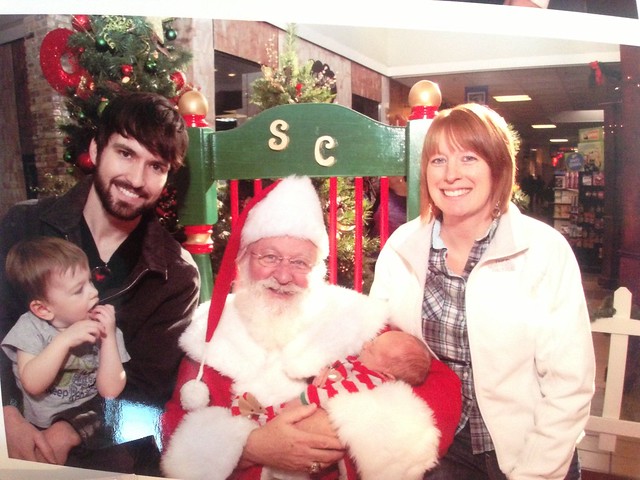 When Maximus gets shy he won’t make eye contact with anyone. This picture is an improvement over him looking towards the right, which was opposite Santa and with the back of his head facing the camera. I tried to get him to look at me, but he got sidetracked with Santa. He’s checking him out pretty good! There wasn’t anyone in line behind us so Bryan and Maximus talked to Santa a little. Maximus didn’t tell him what he wanted for Christmas, but he did tell him “Ho Ho HO!” Good thing Papa taught him what Santa says. He did think that was pretty cool when Santa did it back!

Not that I have a lot of experience with mall Santas but this guy was awesome! He rocked my itty, bitty baby like he loved little babies. He talked to my toddler like he cared and wanted him to not be scared. And he told my husband he enjoys malls over “other” stores he’s done that give out tickets and push people through. His wife was equally awesome. She gave Maximus a coloring book before we left and he waved bye to both of them.

In the car, Maximus asked for his coloring book. I said something about the coloring book Santa gave him. “No, Santa’s grandma.” And then Bryan had to pull the car over so we could both laugh hysterically. Yes, she was older. But so is Santa.

*It’s a picture of a picture.