On October 4, I passed the 7 month mark. It was like any other day, except I had to take my one-hour glucose test. I also had to pack for a seven day work trip. Besides those two things, I also had to make sure my house had food and was cleaned for the babysitters who would spend the next week watching Maximus and Wrigley. If I hadn’t had a doctor appointment I probably would have forgotten how far along I was. The second pregnancy has pretty much been like that the whole way through. I keep forgetting how many weeks I am, which is a nice way to pass the pregnancy. I remember with Maximus that I was anxiously awaiting his arrival. This time around it’s like I’m playing catchup on weeks. I’m either getting rid of them or not giving myself enough of them. I suppose this is how my life will be for the next few years. 🙂 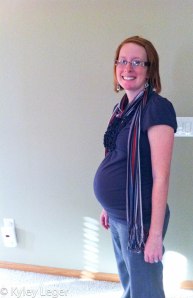 I’m still on track for measuring about a week earlier than my due date. My weight gain is consistent and my blood pressure remains the same each week. I’m feeling pretty good in terms of health. My lower back has bothered me the whole pregnancy, but it’s not usually a bother until the end of the day. I suppose it makes sense, I’m carrying around a lot of weight on my lower half. It’s more difficult for me to get up and down from the floor so I’ve gotten accustomed to sitting in the rocking chair at night while Maximus and Bryan sit on the floor reading books. Maximus doesn’t seem to notice that my body is any different. I’m trying to get him to rub it and talk to baby brother, but he’s not really playing along. Sometimes it’s all I can do to get him not to sit ON my stomach. I’d much prefer that he snuggle with it, but it’s probably not that comfortable. 🙂

Maximus also doesn’t seem to care that holding him can be a challenge. I try to rest him on top of my belly so I don’t have to do so much work, but when he starts moving around it can be really hard! I’m not surprised that when I’m holding him, LBL 2.0 usually moves and tries to push back against his big brother. I imagine it will be no different when they are both on the “outside.”

With only a few months to go, we’re trying to get as many snuggles in as possible. I’m thankful that Maximus is taking some time to rest and watch cartoons. At the end of a long day, my body sure does enjoy that! I’d much prefer to sit on the chair with him than sit and watch him play with his toys on the floor.