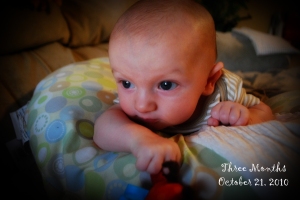 I can’t believe three months have already gone by! When I think back to the birth of Maximus, it feels like it was years ago. Remembering those first two nights in the hospital…with the glow of the tv, being confined to the bed, feeling utterly exhausted and barely able to keep my eyes open (because I forgot I had contacts in – opps!), watching Bryan pace with Maximus, holding a bundled up Maximus while I tried to sleep…seems like a lifetime ago.

Gone is that little itty bitty newborn. In his place is a BABY. No longer is he fragile. He’s solid and full of wiggles and grins.
Fun facts about the third month of Maximus:

We’ve had a lot of fun with Maximus this third month of life! Time is going by too quickly, but we’re letting the house take care of itself and we’re enjoying each minute of each day.

One thought on “Baby Update: 3 months”