Since the Christmas tree is up and the decorations are set, we decided to start a new tradition in the Leger house. We’ve joined the millions* and are participating in Elf on the Shelf! Maximus has never heard of it and he’s never seen one. We thought 4 1/2 was a good age to really get into it. And Quinten will literally copy whatever his brother is doing. (Although, he hasn’t actually seen the elf yet.)

Their elf wrote a letter and Santa gave them a book for “being so good.” I planned on explaining that Santa left a book to tell the children about their new little friend, but Maximus decided it was because they were so good. Whatever. The concept of the elf took a little more explaining than I thought it would. I assumed the book would be pretty easy to understand. Nope. We finally got it figured out and then had to really push the idea that there was an elf in our house. In the letter, their elf gave a clue where he was hiding, but it was lost on little ears. In the end I had to very obviously point my head in the direction of the Christmas tree and eventually Maximus saw the elf! For the next hour he whispered. Heehee! 🙂 Somewhere in the explanation, he thought he had to be really quiet for the elf.

He asked all kinds of questions… How did he get in here? Why didn’t I hear Santa? I didn’t hear Santa’s bells. How come he doesn’t have real hair? How come he’s not moving? Why isn’t he talking? I just saw him turn his head and look at me! How long does he get to stay with us? I think he landed on the deck.

He’s still nameless. We’re really trying to let Maximus name him. The only two names that he suggested are Captain and Elfie. He changed his mind about Captain, so we’ll keep working on it. Whatever he ends up being named, he needs to remember that his hiding places have to be fairly obvious. And high enough that a 2-year-old can’t touch him. I have a feeling he’s going to be a well-behaved elf. We have some impressionable little guys in our house right now who are learning the differences between right and wrong. Something tells me they need some positive examples. 🙂 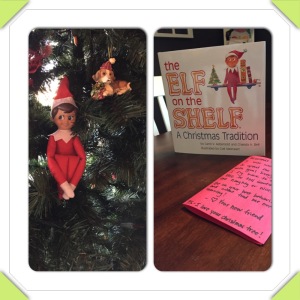 *that’s a guess, but probably pretty accurate from all the ideas on Pinterest.

Do you have an Elf on the Shelf? If so, what’s your favorite hiding place?