Quinten has changed a lot over the past month. I’m a little sad that I didn’t notice the EXACT moment it started happening. I’ve been much better with him then I was with Maximus. I wasn’t that sad when he could roll over, or sit up, or stand, or when he started walking. It’s such a bittersweet moment as a parent. I’ve tried really hard to love every age and stage. I don’t want to wish my children’s babyhood away. People always tell me I’ll be wishing I could come back to these days. So, while I didn’t get much sleep over the past year, I wasn’t wishing it away. I was willing the first three months to go slower so my maternity leave wouldn’t be up so quickly. Looking back now, I think that time would have been so much more enjoyable if Maximus had been 3 1/2 instead of 2 1/2. He was still a baby then. If I was doing it now, we’d be able to have a lot more fun. We’d be able to play games and have good conversations. At 2 1/2 he was still very much in need of me and my attention. But, no regrets about it! 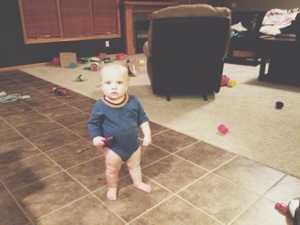 Quinten celebrated 13 months by wearing a shirt with a monster on it that said, “FEED ME!” And that, folks, is a perfect summary of him. Maybe one day that won’t be the case. Maybe one day he won’t have fat, chunky legs or a big ol’ pot belly. He probably also won’t have squishy cheeks that demand nibbles. I’m also sure he’ll lose those sausages that we call feet. I do hope that he eventually stops screaming every time he’s hungry. While I understand the strong desire to eat, it does no one any good to scream while supper is being made. I think that’s learned in preschool. Ok, I hope it is. And I hope that’s something that Quinten wants to do because Maximus is doing it. 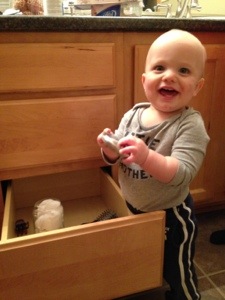 I’m pretty confident that we are just in the beginning of fighting and wrestling and wanting to do everything his big brother is doing. If I’m honest, there’s a little bit of that both directions. I could fool myself and say that’s because they both love each other so much. But, we all know it’s because it’s hard to share at three and at one you have no idea what’s going on other than getting that toy into your mouth. Someday he’ll stop putting everything into his mouth. He’ll play with things instead. He is having a lot of fun with buckets and containers. In. Out. In. Out. Although sometimes he get’s confused and tries to put buckets on his head. Maybe that’s also taught in preschool.

He surprised us a few weeks ago by taking four-five steps across the room. I’ve learned it’s totally his style. Instead of trying the wobbly two steps, he waited until he could do it right. By the second day he was walking across the house and dodging Maximus and turning around. He cruises around from room-to-room carrying toys.

He’s recently added two top molars, which also caused our sleep streak to end. They are still working through so he’s a fussy mess and wakes up a lot. The benefit is that soon he’ll be able to eat faster. Or something. He eats pretty fast right now but I think more teeth will only help him. 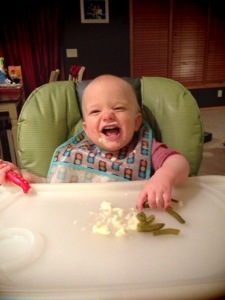 I don’t have it in my to make monthly updates a priority, but he’s making some big leaps lately!