We’re trying to get back into The Routine and I’m pleasantly surprised that everyone did pretty well this morning. Quinten was up crying at 2:45 so I didn’t get to sleep through the night, but I surprised myself and got up kind of on time. I’m going to try to shave a few minutes off my sleep time over the next week and that should put me in a good spot. New year, new start on life. Or something.

Maximus is a lot like both of us. He needs to be busy, like Bryan. He doesn’t want to wake up, like me. This morning he whispered to Bryan that he didn’t want to get up yet, because he was still tired. I’m not sure Bryan even knows what kind of bribes he was trying, but something triggered Maximus and he got up. When I saw him {literally} pop into my bathroom, he was dressed and excited. He was talking very fast and very loud. No matter how many times Bryan tried to get him to talk quietly, he just couldn’t CONTAIN HIMSELF. Maybe that part of him that is like Bryan, really did want to go back to daycare today. And the part of him that is like me, cried yesterday because he didn’t want Christmas to be over and he just wanted to stay home.

It’s pretty fun living with a little human and watching them morph from one personality to the next. Well, except when they take on those traits that you don’t want to see passed along. We’re still arguing about where his “passion” comes from and the sadness that comes with not being able to do something right. 🙂

Being back into the swing of things is a little different in January. You see, in December, we didn’t have to leave the house on those super cold days when it was below zero. I hate being cold and I hate going outside when it’s below 30. I learned pretty fast that kids makes it absolutely horrific to be out in the cold. They can’t wear coats in their car seats so you bundle up in a sweatshirt or fleece, hat, and gloves. You can put their winter coat in the car, but that means you stand out in the cold and get them out of their seat and into a coat. But there’s still another child strapped into their seat! We’ve resorted to fleece, hat, gloves, AND A CAR BLANKET! We had a few minor setbacks about who got the blue blanket, but that’s been sorted out now. {I can’t wait until Quinten can join in the arguments!} It’s way easier to pull a child out of their seat and wrap them up in a blanket, of course that only works if you’re dropping off at daycare or there are two of you. If Maximus had to walk anywhere, I guess I’m suffering in the cold while I get him into a coat. I completely understand the car seat safety rules, it makes sense that you can’t get a kid tight into a car seat if they are wearing a heavy coat. It’s made me look down at my puffy coat a time or two. I pull the seat belt extra snug and wonder why I’m not following the same rules I make my kids follow. Of course all of these problems can be solved rather easily …. MOVE SOMEWHERE WARM! {Don’t worry, Mom, we aren’t going anywhere.}

So, we’re back to our normal routine and we’re trying to make the most of out the frigid temps. I’m using my car starter every day and almost bought a Christmas present for my seat warmers. {I’m sort of kidding.} I’m using the new calendar year to remind myself of all the good things in my life. Maximus is doing his part too and looking for the next milestone. He has requested a countdown to his birthday. In six months temperatures will be in the 100s. Six isn’t that far away… 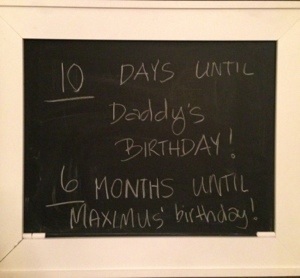