Maximus keeps us on our toes. He’s a good mix of being an independent player and wanting one of us to play with him. He recently became interested in a planter that has been in the house most of his life. There was a short time that it was outside, but he’s been seeing it day-in and day-out since he was mobile. {Fortunately} it never dawned on him that he could use it as a toy. Until a week ago. One Saturday morning he couldn’t get it out of his head. “Bike! Bike!”

Thankfully, he didn’t push it around the tile floor too long before he decided the carpet was better. If you’re wondering where the plant is, I moved it to a place that gets more sun and decided the bike wasn’t a good fit for that spot. At this point I’m not sure if it would be better to pull attention away from an empty bike or if that will mean my plant is in danger. 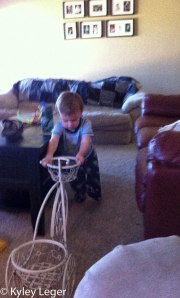 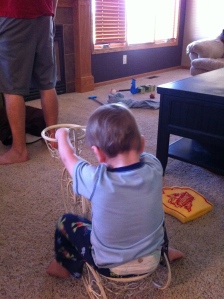 Of course pushing it around the living room wasn’t as exciting as riding in it. Thankfully, he couldn’t get it to move when he sat in it. 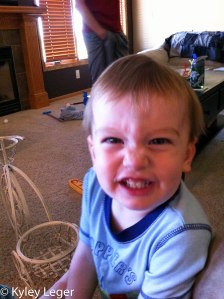 No toddlers or plant holders were injured in this riveting bike “ride.” We did manage to distract him eventually and have quickly changed activities the few times he’s shown interested since. I’m sure this isn’t the last time my decorations will be used as toys. Hopefully all the experiences will turn out as uneventful as this one! {This is where you laugh at me because I’m going to have two boys and a dog running around this house…}