Last week I realized that I hadn’t seen Maximus suck his thumb recently. I watched him for a day or so and noticed that he watched cartoons and went to bed without doing it. He’s been sucking his thumb since he was three months old, so it’s one of those things that you see but don’t really notice. Typical thumb-sucking occurs when watching something on tv, falling asleep, and sometimes riding in the car. Looking back, I can’t remember the last time I saw him stick his thumb in his mouth at bedtime. We have a very specific bedtime routine: I carry him to his room, make sure all his Legos are on his bed, find his blanket and his tag, give him a hug and kiss, and cover him up. He’s usually not ready for sleep yet, so he hasn’t been sucking his thumb for a while. However, when I check on him later he usually has his thumb in his mouth. Since Quinten is basically sleeping, I don’t check on Maximus in the middle-of-the-night. I might need to sleep creep this week to see if he’s doing it in his sleep. I know he’s not doing it when he’s watching cartoons and I’ve also noticed that he’s really into answering the questions and talking about what’s going on. I guess less observing and more following of the show.

Last December we took him in for his first dentist appointment. With the upcoming arrival of his baby brother {ended up being the NEXT day}, the dentist agreed that he would need his thumb for a while but told us to try to get him to stop sucking it over the next year. We smiled politely but I’m sure we both shared the same thoughts, “Yah, right! How can you get a kid to stop sucking his thumb when he does it while he’s sleeping?!”

He had another dentist appointment right before Christmas. It was after his appointment that I decided to ask him about his thumb sucking. Until this point, we tried not to make a big deal about it. Every once in a while we’d ask him what he was doing or why he was sucking his thumb. He never really knew how to answer us, he always told us how he sucked his thumb. When I asked him last week if he still sucked his thumb, his response was simple, “No.” You don’t? Did someone tell you to stop sucking your thumb or did you just stop? “I just stopped.” Ok, then. So I guess he just stopped sucking his thumb. This turned out much better than I could have expected! I don’t have any great advice on how to get your toddler to stop using a pacifier or suck their thumb, like most other things in his life, Maximus decided when he was ready. That’s how he slept through the night, that’s how he was potty trained, and apparently that’s also how he stopped sucking his thumb. One of these days I’ll catch on to this parenting thing and I won’t be so surprised when things happen!

He still has a small blister spot on his thumb so I don’t think it’s been too long since he’s done it, but I’m very proud of him for not needing it anymore. Other than his special blanket and tag, that was one of the last baby things remaining. I suppose he is growing up and there’s not much I can do to stop it! 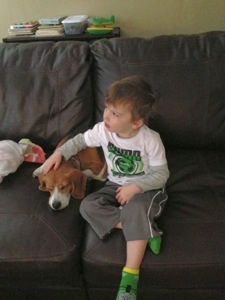