If you’re local (or used to live here), it probably didn’t take you long to hear about the latest development in our favorite eatery. If you aren’t, last month we had a restaurant announce a menu change. Corporate headquarters had passed down a change that all restaurants would follow the same menu. (For good reason: calorie and nutrient information.) My town is pretty proud of our Taco Johns. Both the food and service are wonderful. They announced that as of September 1 they would no longer carry french fries, soft serve ice cream, apple grandes, or chile verde breakfast items. The announcement was made via Facebook and within hours it was being shared on walls all over town (296 shares to be exact with 188 comments on their post alone). People were sad, they were mad at corporate, and they were loyal.

A few friends of mine started a Facbeook event, Finish the Fries Day. On Friday, August 30, around 300 people told Facebook that they’d be at the event. Total invite list was over 1000 people! We were there in support of a food that got me through both of my pregnancies. 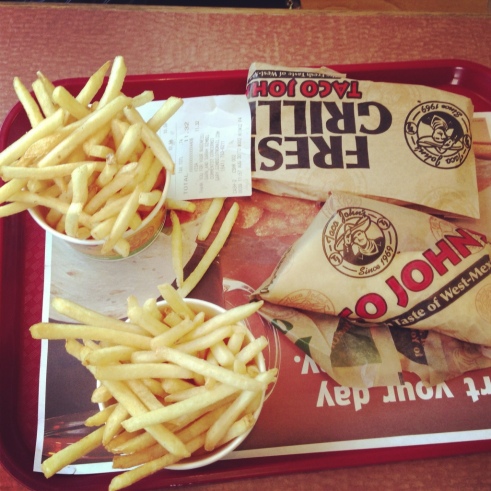 As a weekly patron, I could eat Taco Johns french fries multiple days in a row or even more than once in the same day. They are that delicious! The best fries in town! I’m sad that they are gone, it’s my go-to fast food place. I’ll still be eating there because the rest of their food is delicious also. But, I won’t be able to fill my french fry cravings anymore! I imagine it will take Maximus some getting used to also. Naturally, he’s a big fan of the french fries. I’m pretty sure it’s the first fast food I gave him as a toddler… And, poor Quinten, he’ll never be able to experience them (well chewing them, he’s obviously had a lot of them via me). 😦

The local paper wrote an article about the event and the owners filled their freezer with french fries. They said they’d sell them til they were gone. I’m sure I wasn’t the only one who hoped that meant that I could get fries the next week. According to their Facebook page, they were gone by Friday evening at 5:55. The community really took this “crisis” seriously. We didn’t leave a single fry behind!

I heard through an unofficial source that Thursday, August 29 was their highest sales at this location. Then Finish Out the Fries happened and Friday surpassed that number by $2,000! (My source is not an official spokesperson.) I know we pulled together and proved that we love those local staples, but I also hope it was proof that we back up our community and business-owners. Those french fries will be dearly missed, but I don’t think that will stop the customers from coming.