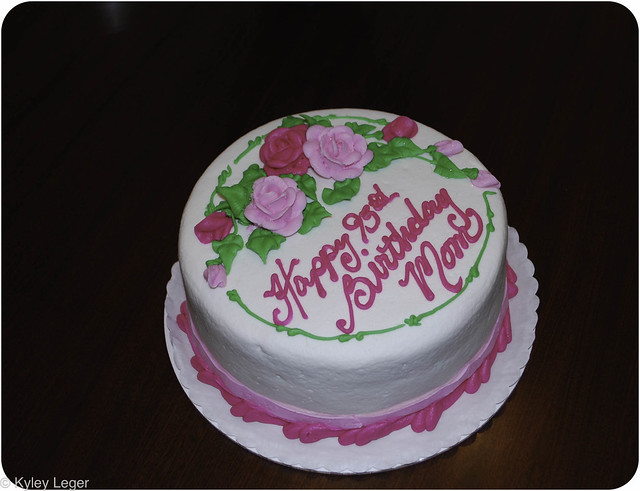 Earlier this month my grandma celebrated her 93rd birthday! What an amazing thing it is to be entering your 93rd year of life! She told someone she hopes she’s not around for that much longer. We laughed with her, but she’s had a pretty good set of years. I obviously don’t know about the majority of her life, but the last 15 or so that I’ve really paid attention to have been pretty good. A pacemaker and broken hip slowed her down over the last handful of years, but she’s still got the spunk of a younger woman. And amazing hearing, like, whisper down the street and she’ll hear you.

When I was in college, I lived 15 minutes from her. It was the first time we’d been less than a couple hours away from each other. At that time she was known for her lead foot and transporting her older friends to all their appointments. Around that time she also removed her filter (around family only). Much to my mother and aunt’s embarrassment, their always prim and proper mother wasn’t holding back around the dinner table. It wasn’t too long before I knew what she thought of our president and heard her swear for the first time in my life. We became pretty close those few years. Me as an adult and her as a hilariously, spunky grandma.

She frequently stopped by my apartment on her way in or out-of-town. She rarely called ahead, but I always knew she was there by the horn of her car when she locked it. In a primarily college-aged apartment building, no one else had a nice enough car with a key fob. 🙂 She’d drop by just to say hi or see if I wanted to go out for dinner. In the hustle and bustle of being a 21-year-old, it was always special when she dropped by and I don’t think she ever stopped by when I wasn’t around. There’s something to say about the luck of those encounters. 🙂

As we do every year, we had cake and ice cream to celebrate another year. Thankfully I had a set of healthy babies. It had been a while since we’d last visited her because we had a round of coughing that wouldn’t go away. We love our grandma, but we don’t want to share our germs with her!

Maximus always wow’s her with his talking and moving. Quinten does a good job of flashing his gummy grin at her and trying to touch everything. She gets such a kick out of seeing them and watching their latest “tricks.” She likes to tell us that we’re going to have to watch those girls when these two get older. I’m a little biased, but I think she’s right. {Insert embarrassing story about Bryan being chased around the playground in kindergarten because the girls liked him. :)}

It’s only now that we’re about 45 minutes away that I realize how convenient it was to only be so close. We try not to let the distance stop us from visiting, even if it means we lose a nap and have a less than enjoyable toddler to deal with that evening. Visiting with her means more than that to all of us. It makes me happy that Maximus can talk about great-grandma’s “house” (assisted living facility) and knows that she’s grandma’s mommy. I hope he always remembers these times. There’s a pretty good chance he will since there’s a popcorn machine in the hallway, lots of puzzles in the common area, and most of the time a band is playing in the lobby!