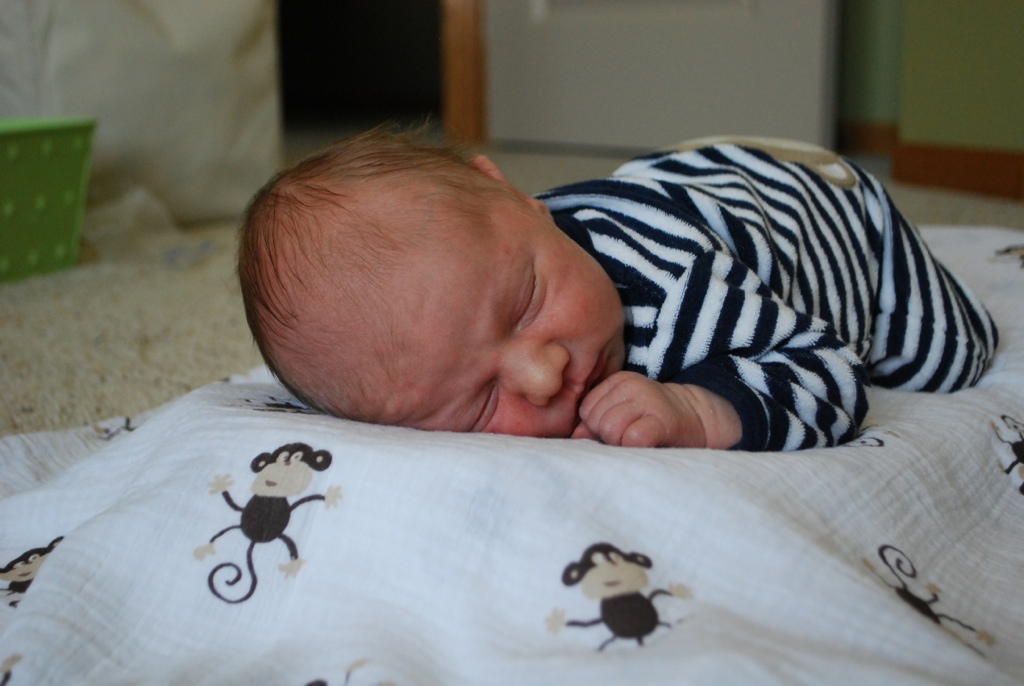 Is he sleeping? It’s the second most asked question after “what’s the baby’s name?”

In my house, half of us love sleep and the other half don’t necessarily need a lot of it. Maximus and I are the ones who love it. I’m hoping that eventually Quinten moves to our camp. After all, it’s nice and cozy over here! 😉

I’d love to get more consecutive sleep at night, but I’m impressed with how well my body has adjusted. With Maximus I remember feeling sleep deprived for what seemed like forever. This time around it didn’t last longer than that first week. I still wake up feeling really tired and the early morning feedings are the worst. That 3 or 4 am wake-up is really tough. It takes me a while to wake up to Quinten’s cries and I often find myself with long blinks and burning eyes once we sit down. I’ve been known to start putting myself to sleep with the rhythm of the back patting.

For the next feeding, I want to hit the snooze button. Except, you can’t do that with a hungry newborn. 🙂 As hard as those early morning feedings are, I haven’t been smart enough to go to bed early. I value my time with Bryan too much to go to bed when Maximus does. If I didn’t stay up, my marriage would suffer a lot during the next few months. It’s the little piece of normal that we can hold on to.

I’m not sure why this time feels easier, because Quinten is definitely not sleeping as well as newborn Maximus ever did. I can only believe that it’s those superhuman mommy powers that you get. I thought I already had them. It appears that you get more each time you have a baby!

I’ll give Quinten a few more weeks until I start getting desperate for sleep. He’s still an itty, bitty little guy who wears newborn clothes. I can’t fault him for having a little stomach that doesn’t hold much or for burning through the milk. But, if he wants to start sleeping a little bit more, I’ll consider giving him the spot of favorite child.

Happiness. 🚴🏼‍♀️❤️
These neighborhood boys are thick as thieves.
Things Hudson Climbs, a thriller series. #18monthsold
Tonight’s sunset is the perfect backdrop for grant writing! Today had a few hurdles as my stress levels got higher, Hudson’s neediness also rose, and my patience grew thinner. • It turned into a night where I counted the minutes until baby bedtime {and then he cried for too long} because it feels like I have a million things to get done. • This sunset is a reminder to find my balance between hustle and rest. I know evenings are for family and it’s not helpful to be anxious for what comes after bedtime. Tomorrow is a new day for all of us and I’m going into it with a clearer mindset and positive attitude. 🧡
Something we’ve gained in 2020...together is a natural state. 🧡Power washed all the garage things. If you’ve done it, you know what our front yard looked like. 😆 🧡Flip flop skating to squeegee the floor. Like wearing ice skates & pushing something that requires core work and balance. #workout 🧡Chronicles of Narnia continues. Monday was a great day!
When you get out of the house for the first time in 2 1/2 months but forget what it’s like to be around people. Close your eyes and pretend they aren’t there. 🤣 #mamasboy💙 #separationanxiety