Saturday was the season opener for Iowa State Football! It’s a game we all look forward to each year. The weather is usually beautiful / hot {y’all know that’s my favorite season}. A clean slate is in front of us with so much potential. The enthusiasm is contagious and moods are light and airy. During one play in the first half, I leaned into Bryan and mentioned just as much. “You know it’s the first game when we cheer for the quarterback to run six yards. At the end of the season we’ll be pissed at his lack of running.”

This season opener was a little extra special because Bryan’s whole family went. I’m not sure if I can say that’s happened before. Both of his sister’s significant others experienced their first Iowa State games this weekend. Hopefully we showed them a good time! Our hillside tickets were a little crowded and hot, but it was perfect for the boys. {Plus, Maximus was free!} The incline of the hill wasn’t the most comfortable for me, but it was doable.

Maximus did an amazing job of hanging in there. The game time got moved back due to better tv coverage so it started in the middle of nap time. Football season to us is just as much about the tailgating, so we arrived early ready to eat and run around. 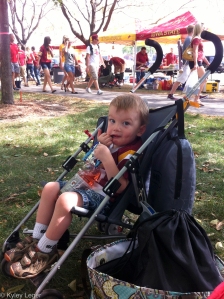 You can’t take strollers into the game, but there was no way we were going to carry a toddler from our parking spot a few blocks away. I think we were both happy with our decision to bring this along and we wouldn’t be able to if we didn’t have a car in the lot right outside the stadium.

We were also fortunate enough that our cold items can go into my in-laws coolers before they leave town so they are upfront waiting for us. Carrying the diaper bag was enough for me. 🙂

I think this is the third or fourth game that Maximus has been too. I think we only took him to one game last year. He was a handful last year, but I’m not sure that he remembers it.

Our little trooper sat down for most of the first half. It was crowded and we were all hot, but he wasn’t too much to handle. He looks really hot in this picture, but he didn’t seem that bad in person. He basically went from Bryan’s lap to mine. We could tell he was restless and tired, but he did a good job. There was no whining or tears. Whew! 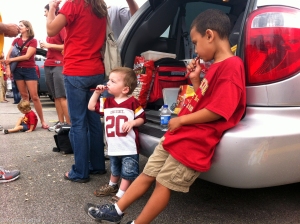 At halftime, the boys found the Twizzlers that I brought. {Ok, I’m the one who opened them!} They also found the peanuts. Maximus enjoyed eating them just as much as he enjoyed stomping on the empty shells.  These two stuck pretty close to the back of the van so they could get easy access to the goodies. Surprisingly, Maximus asked me each time he went to take another one.

We moved to a different spot for the second half and that’s when the sillies kicked in. Maximus couldn’t stay in one spot. He sat on my mother-in-law’s lap for a good portion of time. Then he rolled around in the grass next to the family in front of us. The woman was laying down and he was laying down next to her. For a while we thought he was going to take a nap next to her, but then he slide further down the hill. Eventually Bryan went down to the bottom with him so Maximus could play in the dirt with some older kids. It got us through the game and Bryan was able to watch from his spot. 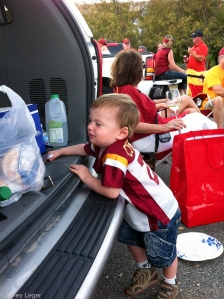 After the game the whining started. It wasn’t too bad, but you can see it starting to show up here. He was looking for the Twizzlers and I kept telling him they weren’t in the van. They had already been pulled onto the table, but he wouldn’t listen to me. 🙂 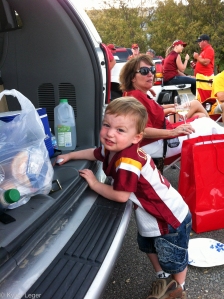 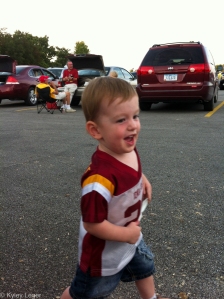 As the parking lot cleared, there was a lot of running and getting rid of toddler energy. I have no idea where it came from, I was exhausted and sat in a chair. 🙂

Two minutes into the drive home, Maximus fell asleep with his eyes open. It was creepy! He was breathing super heavy and Bryan was a little concerned that something was wrong with him. That’s when I realized that he had fallen asleep so fast he hadn’t shut his eyes. Once we got them closed, it was a peaceful ride home. I snapped this picture after we got home, where he tolerated a pj change and fell right asleep.

The Iowa State football game was a perfect way to spend our Saturday during the long weekend. Even with the responsibilities that come with a small child, we all enjoyed ourselves and hope to make it to a few more games this year before the weather turns unreasonably cold.