In my house there is a special little boy who fills the silence. His feet can be heard through the house. Thud, thud, thud through the kitchen and halls. An endless chatter of indistinguishable words scattered about real ones. Climbing on couches easily but with a few miscalculated leg lifts that result in both feet still on the ground. Screams, cries, and hand gestures when something doesn’t go his way. Lots of grabbing of phones, remotes, and anything that isn’t made for tiny, chubby hands. Many phone conversations of “ello!” had with iPhones, remotes, and anything else that looks like it would be a good phone. The biggest of helpers when people come over. A little butler who is very quick to show where coats and purses are hung up. He’ll even help take a coat off, err, rather tell you to take it off by trying to do it himself. In case you forget where your shoes are or what they look like, he’ll make sure you’re reminded by bringing them to you. Even if they are wet and you don’t want them. A constant water boy; always taking giant gulps. Regardless of the owner of the water bottle, all share with this little tyke. {Until someone buys you a new one and it’s harder to open! Toddler proof – BAM!} The player of cars that go “groom,” the builder and destroyer of blocks, the thrower of balls, and the banger of drum sticks. This bottomless pit of an 18-month old is quite the special addition to our house. He makes it a home. 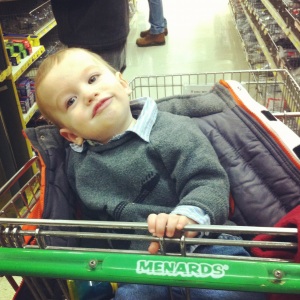 Since I don’t remember where I put the baby book, not to mention the last entry was at about 6 weeks. Here’s what he’s doing specifically. 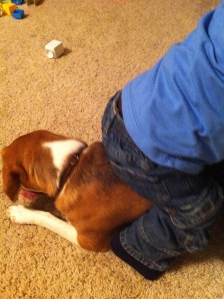